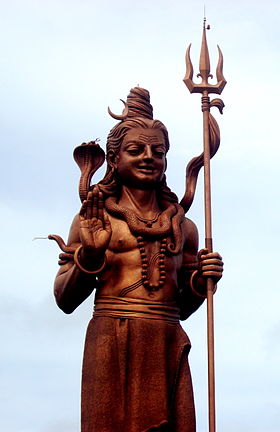 Shiva (meaning "Auspicious one") is a principal deity of Hinduism who is especially revered among the cluster of Hindu groups known as Shaivites. Widely worshipped by Hindu communities throughout India and the world, Shiva is an ancient Hindu deity that is associated with the paradoxical motifs of destruction and regeneration, eroticism and asceticism, sexuality and celibacy. Hindu religious iconography and mythology simultaneously describe him as a great ascetic as well as co-generator of the universe along with Shakti (the female principle of creation).

Shiva (also known as Śiva) is part of the Trimurti (the Hindu Trinity) alongside Vishnu and Brahma. Like many Hindu deities, he has a complex and dualistic nature with simultaneous characteristics such as creator and destroyer, oldest and youngest, as well as the eternal youth and infant. He is said to be the source of fertility in all living beings as well as having gentle and fierce forms. Shiva is said to be the greatest of renouncers as well as the ideal lover. He destroys evil and protects good. He bestows prosperity on worshipers although he is austere.

Shiva is a yogi who has notice of everything that happens in the world and is the main aspect of life. He is called "omnipresent" and is said tp reside in everyone as "pure consciousness." Yet one with great power, he lives a life of a sage at Mount Kailash. In the Shaiva tradition of Hinduism, Shiva is seen as the Supreme God and has five important works: creator, preserver, destroyer, concealer, and revealer (to bless). In the Smarta tradition, he is regarded as one of the five primary forms of God.

Many practitioners of Hinduism focus their worship on Shiva and his many aspects, in a tradition called Shaivism. Since Shiva is such an important member of the Hindu pantheon, some people outside of this religion are vaguely familiar with him.

In images and sculpture, Shiva is often represented as immersed in deep meditation or dancing the Tandava upon the demon of ignorance in his manifestation of Nataraja, the lord of the dance. Shiva is usually worshipped as the Shiva linga, the phallic symbol (representing the male sexual organ) that symbolizes Shiva's creative regenerative power, potentiality, and, paradoxically, his ascetic restraint. Due to the symbol's sexual associations, however, it has often been seen as controversial and criticized by outsiders. (Sexually immorality and immodesty are usually distinguishable marks in pagan deities.)

Various forms of Hinduism have been practiced for thousands of years, with the oldest beliefs and teachings of the religion being found in a series of sacred texts known as the Vedas. Originally, Shiva appears to have been worshiped in the guise of Rudra, an older god who was in charge of storms, winds, and hunting. Rudra was sometimes known as "The Terrible," in a reference to his wild and savage ways.

Like Rudra, Shiva is a very destructive god, capable of wreaking havoc and burning away impurities. But Shiva is also a god of creation, and considered a god of truth, goodness, and beauty. Many people consider him to be a very auspicious god, as well as a god of paradoxical ideas. Many statues of Shiva, for example, depict him with both female and male attributes, enforcing the concept of Shiva as a very dualistic and sometimes confusing figure in Hindu mythology. In addition to being a creator and a destroyer, Shiva is also associated with dance, the arts, and wisdom, and he is a respected figure in the yogic tradition (see Yoga and Dangers of Yoga).

In most depictions of Shiva, he has a third eye, matted hair, and a crescent or horn on his head. The river Ganges also plays a role in Shiva's iconography, since the god is closely associated with the Ganges, and snakes may appear wrapped around Shiva as well. He carries a trident in some images, as that is his weapon of choice, and his body is often naked and smeared in ash. When he requires transportation, Shiva rides a white bull named Nandi.

The primary family of Shiva consists of the goddess Parvati and their children, Ganesha and Skanda. Shiva is also associated with other goddesses and gods in the Hindu pantheon, such as Vishnu and Kali. Shiva's first consort according to Hindu mythology was Sati, a goddess of loyalty, truth, and long life. According to legend, Sati immolated herself because her father disapproved of her marriage to Shiva, and she was reincarnated as Parvati.

Immoral rites and groveling superstitions has been a common theme in Shaivism and Vishnuism. While, on the one hand, the practice of asceticism was pushed to its utmost extremes of fanaticism, on the other the doctrine of bhakti was perverted into a system of gross sexual indulgence, for which the amours of Krishna and the Gopis served as the model and sanction. One factor which contributed strongly to the degradation was the veneration of the Shakti, or female side, of these deities. Popular theology would not rest until each deity was supplemented with a wife, in whom the active nature of the god was personified. With Brahmá was associated an ancient river-goddess, Sarasvati, honored as the patroness of letters. Vishnu's Shakti was Sri, or Lakshmi, patroness of good fortune. With Shiva the destroyer there was associated the terrible, blood-thirsty, magical goddess Durga, or Kali, formerly delighting in human victims, now appeased with sacrifices of goats and buffaloes. Rama had his consort, Sita, and Krishna his favorite Gopi, Radha. The worship of these Shaktis, particularly Shiva's consort Durga-Kali, degenerated into shocking orgies of drunkenness and sexual immorality, which even today are one of the many crying scandal of Hinduism. (For other scandals, see Caste System and Hindu Scripture.)

In the ancient writing "Recognitions of Clement", St. Clement of Alexandria states that the fables or myths about the pagan Roman and Greek gods and goddesses gave the pagans a false justification for living wicked lives ("Recognitions of Clement", Book 10, Chapter 23). This same statement can undoubtedly be applied to the Hindu gods and goddesses and many of their evil and wicked deeds.

What is the Bhagavad Gita?

What is the Mahabharata?

What are the Vedas?

What is the Ramayana?