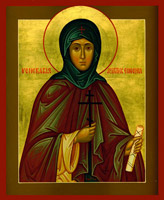 "It happed so that no man knew that she was a woman, yet there was a lady accused her of adultery tofore the judge which was her own father."

The Life of St. Eugenia

Eugenia, the noble virgin, which was daughter to Philip, duke of Alexandria, which for the emperor of Rome governed all the land of Egypt. Eugenia issued privily out of her father's palace with two servants, and she went into an abbey in the habit and array of a man, in which abbey she Ied so holy a life that at the last she was made abbot of the same. It happed so that no man knew that she was a woman, yet there was a lady accused her of adultery tofore the judge which was her own father. Eugenia was put in prison for to be judged to death. At the last she said to her father much thing for to draw him to the faith of Jesu Christ. She rent her coat and showed to him that she was a woman and daughter of him that held her in prison, and so she converted her father unto the christian faith. And he was after an holy bishop, and at the hour that he sang his mass he was beheaded for the faith of Jesu Christ; and the lady that had falsely accused Eugenia was burnt with fire of hell with all her party. And after that, Claudia and her children came to Rome, and much people were by them converted, and many virgins by Eugenia, which Eugenia was much tormented in divers manners, and at the last by the sword accomplished her martyrdom, and thus made the offering of her proper body to our Lord Jesu Christ, qui est benedictus in secula seculorum. Amen.
The Lives of the Saints