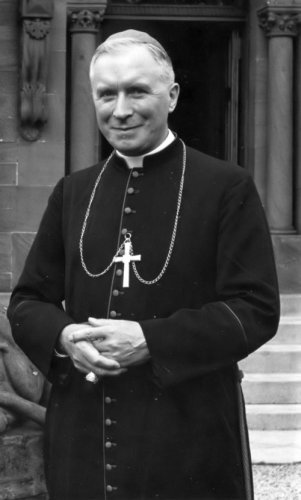 Marcel François Marie Joseph Lefebvre (29 November 1905 – 25 March 1991) was a French Roman "Catholic" archbishop. Following a career as an Apostolic Delegate for West Africa and Superior General of the Holy Ghost Fathers, he took the lead in opposing the changes within the Church associated with the Second Vatican Council. In 1970, Lefebvre founded the Society of St. Pius X (SSPX). In 1988, against the express prohibition of Antipope John Paul II, he consecrated four bishops to continue his work with the SSPX. The Vatican II sect then declared that he and the other bishops who had participated in the ceremony had incurred "automatic excommunication" under canon law. However, heretics have no power to excommunicate anyone.

Who is Marcel Lefebvre?

Lefebvre was an archbishop in France who resisted many things about the post-Vatican II religion, recognizing them to be departures from traditional Catholicism. He recognized the New Mass to be Protestant and opposed to Tradition. He also opposed the heresies of "ecumenism" and religious liberty, which were taught at Vatican II. He began seminaries for the formation of priests who would be offering exclusively the traditional Mass, and he ordained them in the traditional rite of ordination. In order to do this, he had to remain independent of the Vatican II antipopes, even though he continued to take the position that they were legitimate popes who held the office of the Papacy. He was also independent of the working communion of the "bishops" who had gone along with the new religion. On June 30, 1988, Lefebvre decided (independently of the Vatican II antipopes) to consecrate four bishops in the traditional rite of Episcopal Consecration, so that these bishops could continue to ordain priests for the traditional rites. He was "excommunicated" by John Paul II within 72 hours, even though no prominent pro-abortion politician has yet been excommunicated by any of the Vatican II antipopes.