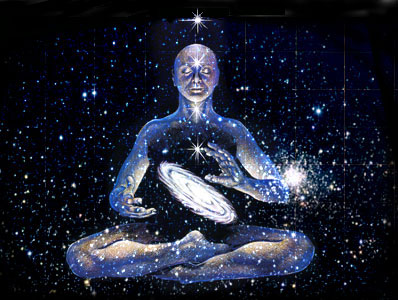 In Hinduism, Brahman is the unchanging, infinite, immanent, and transcendent reality which is the Divine Ground of all matter, energy, time, space, being, and everything beyond in this Universe; that is the one supreme, universal spirit.

In Hinduism, Brahman refers to the supreme cosmic power, ontological ground of being, and the source, goal and purpose of all spiritual knowledge. Non-Hindus often translate Brahman as "God," but this is inaccurate. According to Hinduism, Brahman is said to be ineffable and higher than any description of God in personal form. Many philosophers agree that Brahman is ultimately indescribable in the context of unenlightened human experience. Nevertheless, Brahman is typically described as absolute truth, consciousness, and bliss as well as eternal, omnipotent, omniscient, and omnipresent.

Not only is Brahman seen as the basis of all that exists in the universe and the fabric of all being, but also mysteriously described as permeating all of non-being as well. Even the human soul in Hinduism, or atman, is widely believed to be connected to, or identical with, Brahman by many followers of Vedanta. While this notion is first touched upon in the Vedas, it was subsequently developed in detail within the Upanishads, the culmination of the Vedic texts.

The Hindu Concept of God

Hinduism teaches that God is ultimately an impersonal, eternal force, essence, or power of existence, having none of the attributes or characteristics of persons (such as knowing, thinking, loving, etc.). This force, called Brahman, is present everywhere in everything in nature, especially in all living things: every plant, every animal, and especially every man.

Brahman can be thought of as a sort of spirit force that has no personal qualities, but which pervades everything in the Universe. The attributes of personality are believed to exist only in physical, material beings. But God, in pure form, is impersonal and has no personal characteristics.

This impersonal essence, pervading all things, is also found within us. So, the "spirit" within us is Divine. It is part of God. The real inner you is God. Your inner essence is the essence of Deity.

The Bhagavad-gita says our eternal souls are "part and parcels of God." "The soul is a small God" (BG, Back - inside front cover and page 6).

When you understand such concepts, you begin to notice common references to them. For example, the "Force" in the Star Wars movies is essentially Brahman - the impersonal universal force present in everywhere and in everything.

These concepts are also popularized by the New Age Movement.

In short, Hinduism views mankind as divine. Because Brahma is everything, Hinduism asserts that everyone is divine. Atman, or self, is one with Brahman. All of reality outside of Brahman is considered mere illusion. The spiritual goal of a Hindu is to become one with Brahma, thus ceasing to exist in its illusory form of "individual self." This freedom is referred to as "moksha." Until moksha is achieved, a Hindu believes that he/she will be repeatedly reincarnated in order that he/she may work towards self-realization of the truth (the truth being that only Brahman exists, nothing else). How a person is reincarnated is determined by karma, which is a principle of cause and effect governed by nature's balance. What one did in the past affects and corresponds with what happens in the future, past and future lives included.

The Divine Essence or Brahman manifests or expresses itself in the physical world in the form of physical beings that possess personality. As such, Deity is manifested in many gods of many forms. Note that according to some Hindu literature, there are 330 million (including local and regional) deities or gods worshiped in Hinduism. It is interesting to note that even in polytheistic religions, one god usually reigns supreme over the other gods, e.g., Zeus in Greek/Roman mythology and Brahman in Hinduism.

"Hindus believe that divine beings exist in unseen worlds and that temple worship, rituals, sacraments and personal devotionals create a communion with these ... Gods." Hinduism Today

There are three Supreme gods: (1) Brahma, the creator, (2) Vishnu, the preserver, and (3) Siva, the destroyer. These are generally recognized as equal, though certain sects emphasize one or the other. And note that they differ in realms of power and authority.

Avatars are incarnations of these gods who have come to earth as men. The best known are avatars of Vishnu: (1) Rama, and (2) Krishna in the Bhagavad-Gita.

There are also many lesser deities having various levels or realms of authority. Some rule over certain areas of the earth or certain aspects of nature, such as fire, sun, wealth, water, etc.

The worship of various deities and images is popular among the people. This worship often involves the use of many images. The concept of the all-pervading Brahman is mainly theoretical among the religious leaders.

The Christian Concept of God

God possesses the characteristics of a living, personal spirit Being

The Bible says that God the Father is spirit (John 4:24), and is not flesh and blood (Matthew 16:17). (Although God the Son is flesh and blood because of his human nature.)

However, God possesses the qualities that characterize living, personal, individual beings. These include the following:

God is not just an impersonal force, nor does God need a physical body in order to possess personal characteristics. God is spirit, not material or physical, and yet He possesses the characteristics of a personal individual.

The Trinity is the Christian doctrine that deals with and describes the nature of God. The doctrine asserts the following:

* There is one and only one God.

* The Father is God, the Son is God, and the Holy Spirit is God.

Man is not divine and cannot become God

Acts 10:25,26 - Peter refused to accept worship from Cornelius because Peter himself was "a man" [Cf. Revelation 22:8,9; 19:10]. Some think Cornelius might look upon Peter as more than a man, and offer to him divine worship: but by prostrating, he might only intend to pay such honour to him, as is paid to persons eminent in dignity, especially according to the custom of the eastern people.

Acts 14:15 - When the people of Lystra tried to offer sacrifice to Paul and Barnabas as gods (vv 8-18), the inspired men said the people should cease such practices and worship the living God. They said they were men like with those attempting to worship them.

It is not true that our inner essence is that of God. Therefore, it is not right to worship any man, neither ancestors nor religious teachers. God is different from man, infinitely above us.

There is only one true God

Three separate Beings possess Deity: the Father, Son, and Holy Spirit. But unlike Hindu deities, these three are completely united in will, goals, purposes, etc. All have complete authority over all aspects of creation (in contrast to one over fire, one over wealth, etc.). So, they are completely united to form one God (John 17:20,21).

The worshipping of images as "God" in worship is forbidden

All such images or likenesses, are forbidden by this commandment, as are made to be adored and served; according to that which immediately follows, thou shalt not adore them, nor serve them. That is, all such as are designed for idols or image gods, or are worshiped with divine honor. But otherwise images, pictures, or representations, even in the house of God, and in the very sanctuary, so far from being forbidden are expressly authorized by the word of God. See Exodus 25:15, etc; chap. 38:7; Numbers 21:8,9; 1 Chronicles 28:18,19; 2 Chronicles 3:10.

Acts 17:29 - Since we are God's offspring, we should not think the Godhead is like gold or silver or stone graven by art or device of men.

2 Corinthians 6:16-18 - Christians should have no agreement with idolatry, but should separate ourselves from it.

Summary: Hindus may believe in an all-pervasive god who has no characteristics of personality or in a multitude of different personal gods, often worshiped by images of gold, silver, stone, etc. But Christians believe in one true God, who is the living all-powerful, all-wise Creator of the universe. Since God has real personal characteristics, we can have a loving, caring personal relationship with God. We can communicate with God, so He speaks to us in His word and we speak to Him in prayer and worship.